My gender is not a limitation to how I live life

By Adriana via UN Online Volunteers 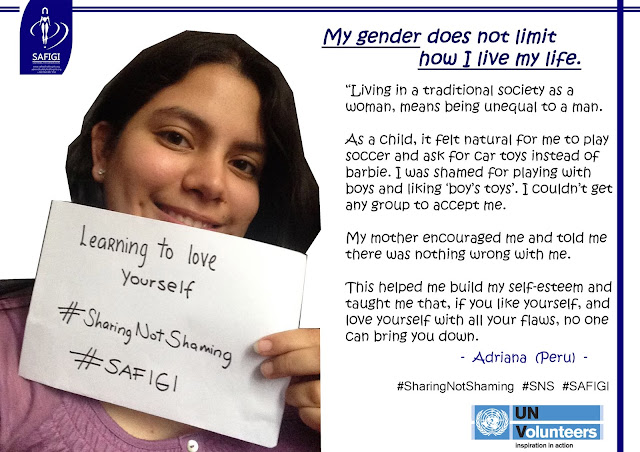 I’m 18 years old and I live in Lima, Peru. I consider myself to be a kind and intelligent person, sensitive, and I love to do normal teenage things like listening to music and having fun. I believe I’m happy, but it hasn’t always been this way.

Living in a traditional society as a woman bring certain things with it. Like, not being considered equal to man, being thought of in a rigid way or having to act as society dictates. I’ve never actually been quite okay with that, so I didn’t stick to it, since childhood. That’s when the bullying started.

I was bullied since first grade, when I was just 5 years old, until fifth grade at 11 years old. I was shamed for a number of reasons, the first one: playing with the boys and preferring “boys toys.”

I never really thought much about it, it just felt natural to play soccer and ask for cars instead of Barbie’s. Don’t get me wrong, I was quite feminine too but girls my age preferred jumping rope and not interacting with the boys. So, I didn’t have many friends at school, because girls wouldn’t play with me, and boys wouldn’t talk with me.

I didn’t care about it because I still had a couple of friends to play with, and that is all that really mattered to me, I mean, I was a 5 year old, all I wanted to do was play and have fun.

Later on, when I was 8, the only two friends I had, moved out of the country. I was left alone, to try and find someone to hang with. By then, I didn’t play with the boys anymore, because they didn’t like playing with “the girls” and the girls liked to just sit around and talk, still I was okay with it if I could get a group of girls to be with.

But I couldn’t get any group to accept me, and also for the reason I was always top of my whole class. This time other kids didn't like me for another reason: being smart. Kids just didn’t want to hang out with me, and I didn’t understand why that was.

I started thinking something was wrong with me, I started to not like myself as much, to feel uncomfortable in my own body, wanting to be like one of the popular girls.

At that time, in my lowest point in life, I would spend hours crying in the school’s toilets as I was alone and wishing for a friend.

It was then that I received one piece of advice from the person I love the most: my mom. She had been there through it all and she told me the others were just jealous, that there was nothing wrong with me, she told me to just be myself and not to stress out about what other people thought about me. That helped me rebuild my self-esteem and I learned a valuable life lesson I still use today: If you like yourself, or at least learn to love what you are with flaws and all, nobody can bring you down.

Years later, it started getting better. I made a couple of friends who liked me for who I was, and the best of all… I didn’t need to change myself. I changed schools, it all got better. I made a whole lot of new friends, and had they best years of my life so far on high school. They were so good; sometimes I don’t even remember I was bullied at all.

Remember, you just have to be strong and keep on going. Things do get better sooner or later, don’t let anyone tear you down.