My religion isn't a way to take away my rights

By Zain Zaman, via UN Volunteers 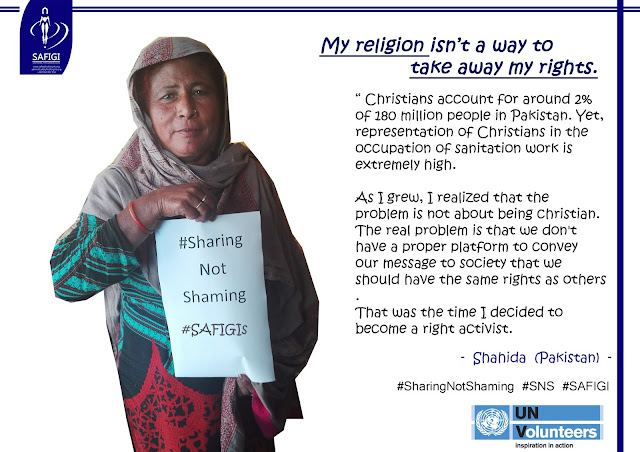 Having been born in the slums of Pakistan, in a poor Christian family, a challenging fate awaited me. Being the eldest among my siblings, I was expected to work and contribute to the family income as my father, who was a cleaner at district hospital, was the sole breadwinner and we were a big family.

Every morning before the sunrise I set out along with father, to go to the hospital where I would start helping my father in cleaning offices, wards and even washrooms before the staff could arrive. I was not born with a silver spoon in my mouth nor was my childhood any was pleasant.

When I reached adolescense, I was feeling ashamed of our status in society. I was taunted countless times for being a member of a family which mainly does the cleaning and sanitation work. Christians account for around 2% of the almost 180 million population in Pakistan. However, representation of Christians in the occupation of cleaning and sweeping is extremely high.

As I grew up I realized that the problem is not about being a member of the Christian community, who are mainly sanitary workers. The real problem is that we don't have a proper platform to convey our message to society that we should have the same rights which other communities are enjoying in Pakistan. That was the time I decided to become a right activist.

Regardless, my family had different plans for me. I married my cousin, who was also a sweeper, moved to his city and settled there. The situation of Christian community was not good there either.

We were facing innumerable challenges and the the biggest of them was that we did not even have our own graveyard to bury our dead - we used to go to other cities with dead bodies to bury our community members. I decide to knock the door of court, after my extensive campain the court decision came in our favor and few years later we had our own graveyard.

I got a job in Tehsil Municipal Administration (TMA) as a cleaner. There were no government jobs except cleaner for us as we did not have the basic education. I was sure that our fate was not going to change unless we sent our children to schools, and so, I went door to door asking women to send their children to school. I took the lead by sending my children to school.

The next task ahead me was to have our political representation at Tehsil level (Tehsil is an administrative sub-division of district in Pakistan), I decided to contest the local bodes election of Pakistan which were held in 2005. Thanks to my community and my vigorous campaigning I won with ease. For next five years I represented my community in Tehsil council as minority Tehsil consular, I conveyed the grievances of my community in each and every meeting of the council.

On the other hand I kept balance between my family and professional life, today four of my sons are doing jobs in governmental departments since my priority was to give them at least basic education which they got.

Now as the local bodies elections are scheduled on December 05, 2015 in Punjab province of Pakistan I am dreaming to unite my community to elect our representative unanimously for Tehsil council so we can pursue our shared goal of acquiring a church for Christians community in our city.

I faced innumerable challenges in my life, there was I time when I was working in Tehsil Municipal Administration (TMA) as sanitary worker, all while taking care of my nine children, representing Christians in Tehsil Council and hearing queries from the  dweller of my constituency simultaneously.

My story goes to show that life is the name of continuous struggle, one should not give up to stereotypes of society rather dare to guide his own fate, It's in one’s own hand to steer his life. I was not educated nor did my family have any political background - all I had was hunger for my cause of become a Rights Activist and contribute to change the living standards of my community which I did and will continue to do so.