My clothes do not define who I am 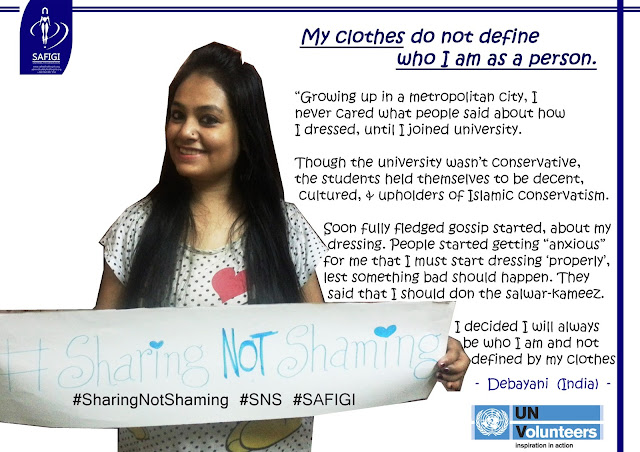 While growing up in a metropolitan city, I had learnt the nuances to always dress up in style. I never wore anything too revealing and my choice of clothes never pricked my family’s eyes.

This helped me to develop a carefree attitude to what people gossiped, about how I dressed. I never cared what people said, how they talked about me or the way they looked at me. I always made fun of it saying, “How would you know that you are looking good unless you are stared at?”

Not changing the way I carried myself, was my way of being rebellious, it was my way of mocking at those who talked behind my back.

But there was a small incident which almost broke me. Two years ago I had joined an Islamic university at the heart of my city. Although the environment of the university wasn’t conservative, the students studying there believed themselves to be decent, cultured, upholders of Islamic conservatism and sophisticated.

Not seeing a reason to change, I showed myself up to the university, the way I had always dressed. My confidence was unwavering and I chose to keep the small comments and gestures of displeasure which came my way now and then, unheard and unseen.

But ignorance wasn’t enough for my “well wishers.” Soon fully fledged gossip started, detailing how I dressed and what I wore.

People started getting “anxious” for me that I must start dressing properly, lest something bad should happen. They said that I should stop wearing jeans, dresses and mini- skirts and instead start donning salwar-kameez. They feared that I might defile the sanctity of the institution and the way women had always dressed there.

I realized people had started talking about me more than required. Some over-smart people even had the audacity to come and tell me on my face that I should dress properly.

But what really affected me was when I learnt that those I had never expected, those whom I had once considered to be my friends also didn’t spare a bone to talk behind my back. That started breaking me from inside. It affected me psychologically and hampered my studies. Soon I realized people had started calling me names. I cried many times, but never wavered.

There were always friends who stood by me. When I became weak, they made me realize that what I am is because who I am.

This helped me to gain back my strength if ever I faltered. I decided to face adversity without changing myself. I decided to be what I have always been. I decided what I wear is my choice, my decision and nobody can take that away from me; no matter what. I will always be who I am, not defined by my clothes alone.

This went on for a year. I kept reminding myself, “Those only are the brave, who hold their ground and keep it till the last,”  I mocked those who kept talking about me. But it was the summer of the next year which actually broke them.

Women in the university had switched from salwar-kameez and had started donning western clothes and there was a riot everywhere. Nobody could say a word; no-one could be stopped.

That day I laughed.

That day I realized it is just a pinch of courage what takes to change the world. It takes only faith and confidence in oneself to stand against all odds. It takes only sharing and not shaming to change others.