What didn't kill me, makes me stronger 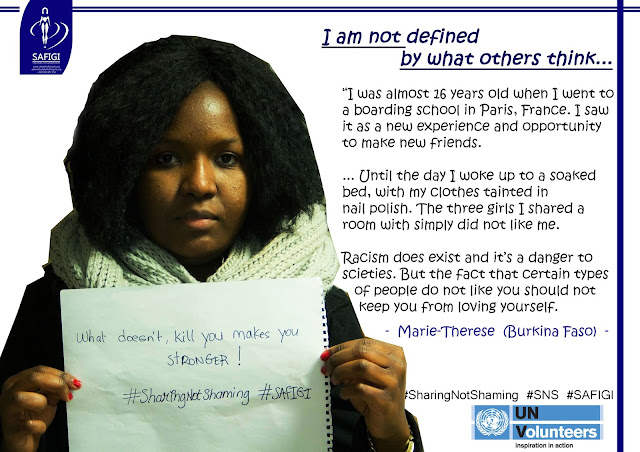 I saw it as a new experience and an opportunity to make new friends. That was my belief until the day things started to take a different twist. At the time, which was 7 years ago; I was sharing a room with 3 other girls.

We didn’t really get along because I believe that we did not even at that time view things the same way.  I have always been an authentic type of person. I always say what I believe in and what I think. Frankness I believe is a necessary quality most particularly in the world we live in today.

One day, that I was asleep I felt like I had been soaked with water. I woke up in pain and saw that my clothes were sodden. There was nail polish all over my hands and clothes. This seemed like a nightmare, and from the second I had discovered what had happened to me I knew who the perpetrators of such an act were.

I made sure to get out of the room and inform the house assistant about what these girls had done to me. But all she said was: get back to bed, it’s late... We will try to solve this issue tomorrow morning. Being someone with a great faith, I just got back to bed after having changed my bed sheets and having put on dry clothes.

For the rest of that night, I was not able to close my eyes for a second. I was traumatized. I felt alone.

The next day, the assistant informed the house chief about the event that had occurred and they convoked the girls who tried to deny the act but they couldn’t because all the proofs were just too blatant.

After a meeting with the school director, the parents of the girls were called for and they were informed of what their daughters had done. They were, suspended from the school for three days and at their return they were punished with manual tasks.

For the rest of that year, they did what was best for them, which was staying out of my way. From that day, every individual who came on my way to shame me was shamed on their turn because this event allowed me to gain more confidence in myself and defend myself whenever I believed something was not right.

Racism does exist and it’s a very dangerous issue for our societies.

I’m sharing my story because I know that all around the world there are thousands not to say millions of people who are bullied because of their origins.

I was one of them, but I survived and I want to say that; the fact that certain types of people do not like you should not keep you from loving yourself.

Marie is a graduate in Public Relations, and Student in Political Science, and Journalism.