Religion is peace, not war

By Vyshakh via UN Online Volunteer 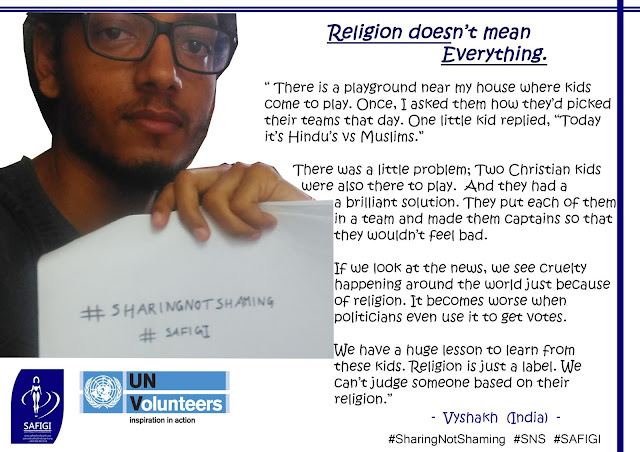 There is a playground near to my house where all the kids in the neighborhood come to play in the afternoon. I often go and sit there watching them play and because of that they knew me pretty well. Once when I went there, I noticed that many of the kids were not there. But they were still playing with the ones present. I knew that they always got into a fight to select the team. So I asked them how they had chosen the team today and one little kid replied “Today, it is Hindu’s vs. Muslim’s”.I was shocked and dumbstruck. I felt a huge sense of shame inside me. If the minds of even these little children were sprayed with the idea of religion and the huge internal conflict surrounding them, how can we find fault with all the grown-ups promoting their religion as the best among all. I wondered about the present situation of our society. Every parent is so busy promoting their own religion and how it is better than the rest to their children that they forget to mention humanity. All the kids growing up has a mental note inside that other religions has some fault about it which makes them secondary to their own religion.As each day passes on, the situation deepens more and more. If we just look at the daily news we can see all the cruelty happening around the world just because of religion. When I grew up, I studied that Hitler killed Jews just because he didn’t like the Jewish religion. Everyone hates Hitler so much that no one yet has the audacity to name their child Hitler due to the immensely cruel atrocities done by him.Let me ask a question to the society “What are we doing now?’ In India, I am horrified to tell that people are being killed just because they eat beef. It is true that in Hinduism, cows are treated as a Godly creature. But I am pretty sure that it doesn’t promote murder.The mindset of a religious fanatic is that every belief of their own religion should be strictly followed and those disobeying it should be murdered. It is just pathetic. The situation becomes worse when political parties involve in it to get more votes.Throughout the world we can see incidents like this happening including the recent Paris attacks or shooting down of a Russian airplane done by the ISIS, which they proclaim as the Holy war.According to me, religion is supposed to be a guide on how a human should live their life to spread happiness and peace among all. The basic premise is that if we do anything wrong, God is watching us and we will be punished for it.All of the religions be it Hinduism or Christianity or Islam or anyone, they all promote peace and one who has read their religious books will never even have a thought of hatred against other religions.Everyone is a human and we love them based on their character or behavior. We can’t judge someone based on their religion.  We can’t be too narrow minded to actually believe that just because a few of the people of their religion are terrorists, all of them are bad and violent. I am a Hindu, my best friend is a Christian and I studied in a Muslim school. I am sure that this is the case of many people living in India. We have a rich tradition of being united and enjoying every festival as one of their own. We shouldn’t allow a few people to disrupt that and evoke distrust among the religions.But all is not lost. The youth or the next generation, has responded brilliantly through the social media against all these religious atrocities and the general conception of one religion above all. And I hope they follow it in real life as well. This gives us hope for the future where every religion is treated as the same and people never fight for it. And I guess I didn’t complete my story. Even though the kids made the team as Hindu’s vs. Muslim’s, there was a little problem; Two Christian kids were also there to play. And these kids had a brilliant solution. They put each of them in a team and made them their captain so that they wouldn’t feel bad.
We have a huge lesson to learn from these kids. For them Religion is just a label and it doesn’t make a difference to them. And I hope at the end of the day, there will be only one winner: ‘Humanity’.