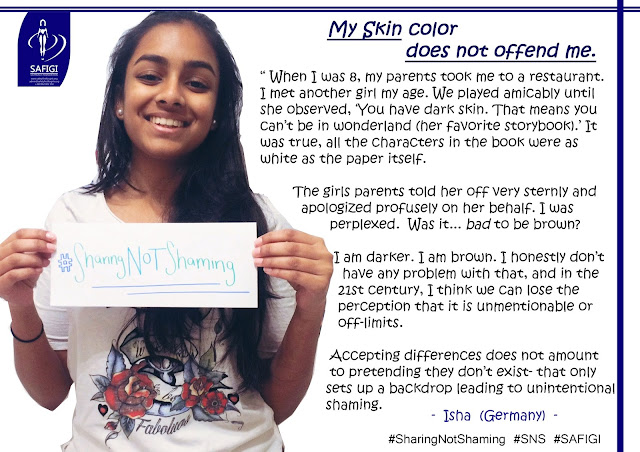 As everyone has noticed at some point, there are certain issues that people are cautious about when talking casually. Physical appearances, ethnicity, gender, mental aptitude, etc. But the one that has struck me most throughout my life is the inherent apprehension in society to talk about skin colour. I wonder if these taboos are really still necessary?
When I was 6 years old, I was on a field trip into the city and our class stopped by a café to buy some ice cream. I remember when one of my friends, scrutinizing all the different flavours, remarked ever so innocuously how I corresponded to the chocolate-brownie flavour, when she herself was better matched with vanilla. We were both surprised when our teacher somewhat severely told her that she couldn’t say things like that- after all, it was true.
When I was 8, my parents took me out for a Saturday-evening dinner to a fancy restaurant where I made friends with a girl of my age. We played amicably enough, until she threw me with the unanticipated observation: ‘But you have dark skin! That means you couldn’t be in the Wonderland!’
Upon closer investigation, I discovered ‘Wonderland’ was a place in one of her favourite storybooks, and sure enough, each and every illustrated character was portrayed as white as the paper itself. I remember holding my own arm up to the pages and agreeing that yes, I wasn’t depicted in this story. I was surprised when her parents sitting nearby told her off very sternly for her remark, apologising profusely on her behalf while continuously shaking their heads at their child. I was perplexed- had she meant it as an offence? Was it… bad to be brown? Is that why her parents did not allow her to mention it?
Recently at a basketball game I played in, when we put our fists together for the pre-game cheer, one of the girls suddenly noticed ‘Oh, the ring of arms looks so cool, especially with all the different colours…’ She trailed off, smiling uncertainly, and then quickly said sorry. Sorry? I was surprised- did she expect someone to be affronted? Clearly all our arms were different colours. My coach quickly brushed it over and began discussing game tactics.
All through my life, I’ve found talking about skin colour is always a slight taboo, but especially drawing attention to someone’s darker colour: these are just a few incidents that have brought this to light. It is not one particular instance where I felt shamed for being a darker colour than people around me as much as it is an in-built attitude that I am continuously faced with. If skin tone is commented on even in the most harmless, inoffensive way, people raise their eyebrows, smile somewhat nervously and steer the conversation off into another direction.
I understand now that due to history, it’s a sensitive topic and people are particularly careful not to cause offence in that regard. But when growing up, this ingrained trait in society would leave me with an unspoken, lingering doubt about whether having darker skin was something lesser, less glorious, something that should not be mentioned in fear of making someone ashamed of their colour.
And that is why I think we should lose the idea that skin colour should not be discussed. Intentionally avoiding the topic is only more awkward, and rather than following the concept of embracing differences it imbibes an approach that insists on ignoring them, as though there is something disconcerting about the topic.
In the effort to convey how our skin tone does not define us; to promote equality; to forget the discrimination in the past, I notice how people are extremely hesitant to ever talk about differences in skin colour in day-to-day conversation. This in fact has always had the reverse effect of making me feel uncomfortable, or even prompting the idea that I should be abashed or conscious of the fact that I (as my classmate had said) am the colour of chocolate, even if chocolate is a minority here.
Parents tell their children to just not talk about it, or to be cautious when talking about divisive topics such as complexion, but I’d like to put the idea out there that comments on that theme really would never have bothered me at all, if I hadn’t detected the consistent unease or hesitation that most people I encounter bear on that issue. I am darker. I am brown. I honestly don’t have any problem with that, and in the 21st century I think we can lose the perception that it is unmentionable or off-limits. Accepting differences does not amount to pretending they don’t exist- that only sets up a backdrop leading to unintentional shaming.
That said, these issues only bothered me when I was much younger. As I’ve grown I’ve seen more Obamas, Oprah Winfrey’s, Halle Berry’s and Beyoncé’s do amazing things in so many different fields. I have enough perspective now to see I never ought to have been so conscious and sensitive in all these little situations in the first place! Still, maybe this is something that could change in society in the future, so that fewer little kids are left to wonder about the unsaid implications of dodging around such topics.
Let’s lose the superfluous taboos.