My Body is Model Perfect. 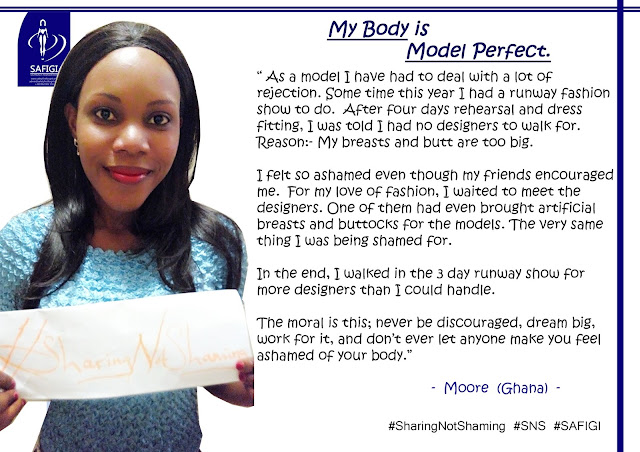 As a model I have had to deal with a lot of rejections and the feeling of shames. Some time this year I had a runway fashion show to do.  The event was a three day fashion show but I had five days to rehearse and do dress fitting for the designers.

After four days of rehearsal and dress fitting, guess how many designers I had to "walk" for? None. Not even ONE. Reasons;  my butt was too big,  my breast was too big. None of the available designers was ready to put their designs on me.

I almost gave up but you see the said event was a very big show and walking its runway I knew will put me on the international modeling stage and I really wanted that. So I decided to come for the last day of rehearsal.

We waited for the designers the whole day; we were informed they will be coming in straight from the airport. At about 7pm in the night, "no show" for the designers.  We were asked to go home and rest for the next event.

And those of us who didn't get any designers to walk for, we were asked to come and watch the show if we wanted to. Well I wanted to walk in one especially this one.
As we were about to leave one of the organizers announced the arrival of the last group of designers. At this point I thought to myself to let me try my Luck.

Well, even I didn't believe what happened... the designers couldn't get enough of me.  One designer had artificial breasts and buttocks for the models.  The very same reason I had not been booked one designer so far as they stated "my body type was just not right" for runway, one designer had told me. Look at me now, will you.

This particular designer let me wear four designs for him.  He was like "I came to Africa so I make clothes for the African body. Some of the designers who we were told we couldn’t walk the runway for their designs, showed up on the morning of the fashion show and the story was different.

At the end of day one of the 3-day fashion show, I had more than enough designers than I could handle. I guess want they say is true "Be careful what you wish for you might just get it."
Some of the girls who would not talk to me earlier on now wanted to take pictures with me. LOL.

The moral of this story of my life is this.  Never be discouraged,  dream and dream big, then wake up and make it happen for you and don't forget... don't ever let anyone make you feel ashamed of your body.