Respect is greater than fear 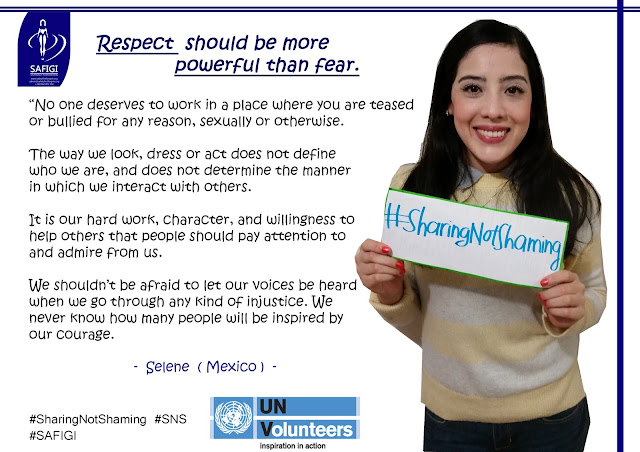 Respect Should Always Be More Powerful Than Fear #SharingNotShaming
At 22 years old and fresh out of college, most young adults out there are embarking upon their first working experiences. Eager to learn and trying to make a positive impact in my first serious job as an English instructor for employees of a transnational company, I was striving to grow by always doing my best, learning as much as I could from others, and ensuring that everything that carried my signature had the best quality.
Helping my students improve their skills, confidence and competence in the language could potentially lead to promotions, or excellent letters of recommendation. How can anyone know that this kind of drive in a woman could be so badly misunderstood?
I had two different groups in which all of my students were significantly older than me. Some of them over 30, but most of them were pushing 40 and even 50 years old. This considerable age difference between me and my students only meant that I had to earn their respect so they could acknowledge my expertise. Thankfully, I was excited about this challenge and I was committed to get my students to achieve greatness.
The lessons began and a few weeks later, one of my students –a manager in the company- came up to me asking for tutoring. I naturally agreed because he needed my help and I knew he could do better. We got together after class and I started assigning him different English-related activities. Then he started asking me about my personal life. He seemed genuinely fascinated by my answers and told me he had never met anyone so gorgeous and appealing before.
The way he looked at me, his progressing closeness, and his increasingly more intimate questions and remarks about what I wore, my hair and makeup, started making me extremely uncomfortable, considering the fact that I knew he had a family and he had a top position within the firm. Even though there was a part of me who was aware of this inappropriate behavior, I didn’t want to make a big deal out of it because I may have had misread the situation and the last thing I wanted was to have a scandal on my hands. So, I let it go.
The tutoring sessions continued for several weeks but my discomfort never disappeared. His advances became more frequent and evident; when he wanted to greet me or hand in assigned tasks, he attempted to hold my hands or waist, hug me, kiss me on the cheek, and caress my back. Eventually I couldn’t take it anymore so I told him his actions were not right and he had to stop. He justified everything by telling me that he didn’t mean anything by it and that we were just friends. We were not friends.
Something inside me stopped me from speaking out to my superiors about it. I felt scared of the repercussions, ashamed of being labeled as a troublemaker or homewrecker. I knew in my heart that I hadn’t done anything to suggest that I was interested in him, and yet I was the one who felt guilty. Was I overreacting? Could all of this get me fired? A million thoughts crossed my mind, and I didn’t have the strength to talk to anyone about it.
I was an emotional mess. I could not continue being in a place where my work was being overshadowed by someone who saw nothing but a piece of meat he wanted to get his teeth into. I had gotten such positive feedback from the rest of the students, and I should’ve been thrilled because of it. It didn’t matter, though. One person had made me feel like my work was worthless.
One day I headed straight to the HR office. I was determined to quit. After the initial greetings, the HR director told me she wanted to talk to me first. She said she had received comments from other employees about a possible sexual harassment case involving me. I denied it at first. I thought I was going to be fired for getting too personal with other members of the company. My word was nothing compared to his. I was just a 22-year-old inexperienced woman against a highly-regarded manager that had a reputation to take care of.
To my surprise, the HR director told me that any kind of improper behavior from a colleague that disturbs another may be considered a form of harassment, and what had happened to me was not going to be tolerated. It was necessary for me to come forward with my story so that the person involved received proper sanctions and it wouldn’t happen to anyone else. I ended up telling everything and luckily, he admitted to acting wrongfully.
At that point, I didn’t really care what the sanction was going to be. I realized that it is reprehensible to treat anyone the way I was treated.
No one deserves to work in a place where you are teased or bullied for any reason, sexually or otherwise. We are all human beings with values and dignity and we deserve respect simply because of it. We are not eye candy, punching bags, or laughingstock to anyone.
The way we look, dress or act does not define who we are, and does not determine the manner in which we interact with others. It is our hard work, character, and willingness to help others that people should pay attention to and admire from us.
We shouldn’t be afraid to let our voices be heard when we go through any kind of injustice. We never know how many people will be inspired by our courage. It is our responsibility to be game changers in the world, and we must begin by setting a great example for everybody else.