Shame the Abuser, Not the Victim

By Adedamola Taofeekat via UN Volunteers 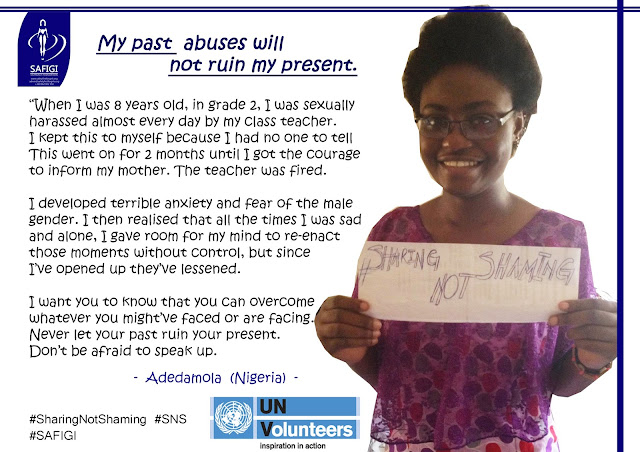 My Past Experiences Shouldn’t Ruin My Present Life
My name is Odofin Adedamola Taofeekat and I am a 21 year old from Nigeria. Who I am today, who I will still become, is shaped by what I’ve gone through in the past, either positive or negative.
Girls face terrible and shameful situations everyday all over the world and a lot of them are too scared to speak up out of fear that those that they value will shun them when they know their stories. I was a victim of sexual harassment.
When I was 8 years old, I was sexually harassed almost every day by my class teacher when I was in primary 2. He would sit by me at the back of the class during class exercises and touch my inner thighs through my skirt.
At first I didn’t understand what he was doing, I would push him away gently scared because he was my class teacher and he could’ve beaten me for being disobedient. However, he was persistent and kept it going for over two months.
I was never really a social butterfly as a kid, I kept to myself always and had no friends so I didn’t have someone to tell my problems too. I knew what he was doing was wrong but I was too scared of the consequences if I had told people. I would always dread going to school every morning because I knew what I was going to face, and face alone.
However, one day after the same occurrence, I found the courage to explain to my mother what my teacher was doing. I told her I didn’t like it and felt uncomfortable, and the next day my parents went to the school and the teacher was fired.
Unfortunately, some news of it got out in school and children can be mean to each other sometimes. I felt embarrassed that they knew what happened and I got a lot of pitiful looks and side talks for it. I was physically and mentally depressed for more than a year. I felt so violated.
I was a little kid that got harassed for over two months without anyone to run to. I felt disgusted at myself at such a young age and I got a certain stigma at school. But eventually I got over it, or so I thought.
I was an early bloomer, so at the age of 10 I stared developing breasts when I as in primary 4. At first I was excited thinking I was a big girl now, but my classmates thought otherwise.
They made fun of me saying it was abnormal to have them at that age and they went as far as bringing up my past experience saying I was having breasts because I let “teachers” touch me. No one wanted to associate with me then and my life was a living nightmare.
Fortunately, I got a double promotion to primary 6 but my mum took me away from that school to start Secondary School. Three years later, I was almost raped in the middle of the night by a 15year old steward working with my family. This event coupled with my early childhood experience affected me for more than two years. I felt everyone that looked at me knew my secrets, I was sad always and developed a terrible case of anxiety and fear of the male gender.
I developed a problem with the way I looked and thought my body wasn’t good enough and it was my fault for letting my teacher harass me for so long. I hated bodily contacts and my school mates saw me as weird. However, I had a great family support, especially my mother.
I began to open up little by little on my sadness and shame. Who I am today is as a result of my past, but I have found a way not to feel terrible about it. I realised that all the times I was sad and alone, I gave room for my mind to re-enact those moments without control, but since
I’ve opened up they’ve lessened and the past remains exactly in the past. I’ve learnt to appreciate my body and although I still struggle with anxiety, I’ve learnt to manage it with the help of family and God.
Wherever and whoever you are, just know that you can overcome whatever you might’ve faced or are facing. No condition is permanent. Never let your past ruin your present, rather let it be a story to tell others that will give them hope. Don’t be afraid to speak up. Always think about you and your well-being and try not to bottle things up because there are always people waiting to listen and help you feel better.


No one can make you feel better about yourself than yourself, I could spend forever telling you how special you are but if you don’t believe it on your own then words will only fade way. #SharingNotShaming