We can overcome racism

By Kumsa Yuya via UN Volunteers 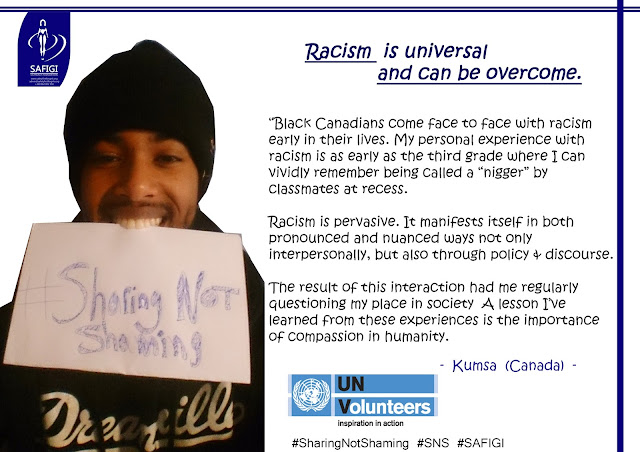 Whether or not we are conscious of it, from birth we are being socialized.
This process of socialization tells us what is valuable, important and beautiful. Although not inherently problematic, often these attributes deemed valuable in society are attached to immutable characteristics that have been assaulted through history.
These characteristics include things like skin color, size of facial features, and behaviours that are a presumed consequence of having these features. Borne out of these historical circumstances is a hierarchy that is clearly discernable no matter where we are in the globe. The result of these arbitrary categorizations is the institutionalization of discrimination; a caste system is thus accepted as nothing more than unquestionable truth.
Although this is the reality for many marginalized groups throughout the world, my story will focus on what I faced and learned as a result of these experiences being an African Canadian. Although Canada is distinguished in the eyes of many from the United States, it is undeniable our histories are intertwined for better and for worse.
Slavery – and the creation of racist stereotypes that were necessary in order to launch this institution persist hundreds of years after the fact. Racism is pervasive. It manifests itself in both pronounced and nuanced ways not only interpersonally, but also through policy and discourse.
Black Canadians come face to face with racism early in their lives. My personal experience with racism is as early as the third grade where I can vividly remember being called a “nigger” by classmates at recess.
Although I am doubtful these children knew the implications of their words, it is still troubling that at such a young age the social categorization of individuals has been so readily learned by them.
They knew who belonged to what group, and where they stood socially because of certain physical characteristics. I had never heard the term before, but I would eventually learn it was derogatory and said only in an attempt to eviscerate the dignity of the person it is hurled toward.
As it had helped cement the position of these students above myself in our social hierarchy, being labeled as inferior had certain implications on my self perception that would only magnify as I matured and began to understand discrimination more deeply.
The result of this interaction and ones similar to it were me regularly questioning my place in society and inherent ability to achieve certain goals. Children have the most expansive imaginations in our society, but the imposition of these barriers is not often viewed from the perspective of the target.
Once racialized, thoughts of what one can not achieve become more prevalent than the endless possibility that was imagined before this process taints the mind.
Thoughts become self deprecating as beauty and intelligence become synonymous with all of the features you are devoid of. Once negativity has been imposed by the outside world onto an individual long enough, self imposition of these destructive self beliefs is inevitable and for some irreparable.
Learning about the circumstances that have put this system into place is liberating. As similar events began to accumulate over the years, I rarely thought about race until after high school, although I was often aware of it.
University acted as the main catalyst for introspection and the analysis of socialization and the arbitrary nature of what is deemed to be social currency. Identification with these negative stereotypes and limitations slowly began to dissolve, and I was left with a blank slate that was at first scary, but later this new found autonomy became intoxicating.
Although I was able to replace these old limitations with many new and positive beliefs, it would be disingenuous to claim that the effects of past and present racism have disappeared.
They are embedded into your personality, and much like smog, is always there to cloud interactions and be ingested by those who remain unaware of the damaging effects.
I am also not foolish enough to think this self realization has resulted in external perceptions of myself to be any more positive. It is this unfortunate paradox that racialized individuals must live with; being forced to deal with and work through racism and develop self appreciation as a result of being thrust into a subordinate position in society.
Conversely, however those that have not had to deal with a particular type of adversity remain unaware and often unsympathetic to the plight of those dealing with these issues every day, allowing these structures to be upheld. It requires the group facing this type of discrimination to accept the current circumstances of society and develop tools to effectively deal with these unique challenges, and is something I had to learn.
A lesson I’ve learned from these experiences is the importance of compassion in humanity. It allows us to relate emotionally to one another and thus spur us into action to dismantle structures that reinforce inequality and alienation.
Throughout history, resistance to discrimination has risen contemporaneously with racism, even when lives were at stake. Although it may not be fair, as part of a marginalized group it is your social responsibility to continue to challenge the status quo.