Teenagers Are Often Libeled for Loving 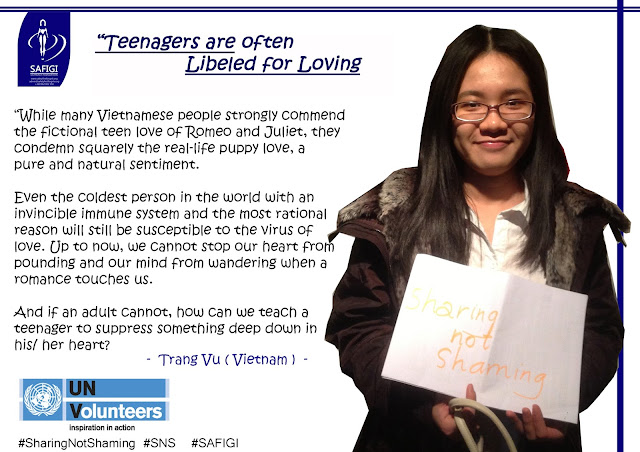 I was studying Italian culture in Perugia, Italy when the junior Eurovision - the most renowned pan - European song contest - took place. Vincenzo Cantiello, a talented flamboyant Italian boy who performed his own love-filled song, “Tu primo grande amore„ (You are my great first love), came out as the winner. Below is the English translation of what he sang daringly, passionately and triumphantly:

It's all changed now that you're there
You are so important in my dreams...
It's so special about being with you
Almost don't believe it and I don't know why ...

I cannot live without
your eyes in my eyes
When your heart beats strong
Pounding along with my ...
You, the first great love
I will never let you go
You, the smile of my stroking
You which illuminate for me
The night ...

You are my very first love
I will never let you go,
Because there is something that tells me
That never again will be so ...

If I had closed my eyes, I would not have imagined that the exceptionally expressive performance and powerful voice came indeed from a teenage boy. The bravura performance was warmly welcomed and admiringly applauded across the continent. I talked to Italian peers and middle-aged women who had children of the same age as the victorious singer. The overall complimentary reaction to such a teenager suffused with fervent love in this country ran counter to what I experienced more than 10 years ago at secondary school.  I was named and shamed just because I had a crush on a schoolmate.

I was a class monitor and an exemplary student in my 7th grade. Proactive participation in extra-curricular activities enabled me to meet numerous brainy and bouncy boys in my school, among whom I had a soft heart for a smart and and sympathetic 9th grader. After some conversations in group meetings, we had incredible impressions of each other.

Be that as it may, we bore in mind that our top-most priority was to earn stellar grades and thrive in various competitions.  Our feelings for each other were accommodated by no more than lingering eye contacts, warm smiles, gentle words and longer strolls together after school. We never even held each others hands as it would be viewed as “too early” for teenagers. I was never distracted from school work, and neither was he. We were both go-getters and high-fliers during our school years.

As he often waited for me so that we could walk home together, gossips started circulating among my classmates and someday it reached my form teacher, who then immediately informed my parents, as if I were doing something inappropriate and immoral. She lectured me that school years must be romance-free and that I was not allowed to "love" at such a young age. "The more you love, the less you will learn.  You have to put your study before your sentiments. It is more important to be achievers than become “adults” at this age."

My mother, upon knowing that, was beside herself with rage. Much to her disbelief and dismay, her demure, docile and diligent daughter “disgracefully” doted on a boy. I was then not allowed to see him, and he was told not to approach me in private. She then discouraged me from partaking in after-school activities, so that I could not come up with any excuse to talk to him. From time to time, I spotted her following me on my way to school and back home, though it was only a 10-minute walk.

I was not the only girl to be caught being “in love” by my teacher. Whomever found visibly into somebody would be criticized and their parents would be called to “teach” them again at home. A classmate of mine wrote a love letter to a schoolmate one year her senior. Unfortunately, the letter was seized by the teacher, who considered it too sentimental for a 13-year-old girl and read it in front of all parents in a parent-teacher meeting. The girl, chided for acting dangerously beyond her age, was in tears for weeks out of shame and sorrow.

In hindsight, like many other female classmates, I was humiliated and hurt even though I did not do anything wrong at all. Acutely aware that both my teacher and my mother meant no harm and that they had my interests in their heart, I am not embittered about having been reproved and reproached, but after all, it is still a scar in my heart. Due to my limerence, and not yet love, I was forced to keep a great friend at arm’s length and have since become more reticent and even afraid of falling in love.

While many Vietnamese people strongly commend the fictional teen love of Romeo and Juliet, they condemn squarely the real-life puppy love, a pure and natural sentiment. Even the coldest person in the world with an invincible immune system and the most rational reason will still be susceptible to the virus of love. Up to now, as an adult, I have not figured out how we can stop our heart from pounding and our mind from wandering when a romance touches us?  How could we shield ourselves against the most beautiful feeling of any human being?

And if an adult cannot, how can we teach a teenager to suppress something deep down in his/ her heart?


Trang Vu Hong graduated from Diplomatic Academy of Vietnam in 2013 with a BA degree in International Relations and Translation. Immensely interested in foreign languages, international affairs and knowledge dissemination, Trang has been involved in many international cultural projects in Vietnam as translator and interpreter.

After obtaining an advanced diploma in Italian language and culture from University of Perugia in 2015, she is currently doing her MA on Erasmus Mundus scholarship in European Studies in France, Germany and Sweden while still participating actively in UN volunteering social projects.