Sex-Ploitation can Happen to Both Genders 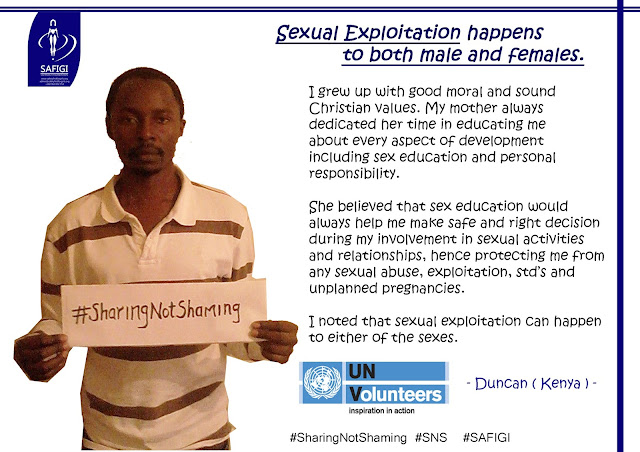 I grew up as a responsible young man, with good moral and sound Christian values. My mother always dedicated her time in educating me about every aspect of development including sex education and personal responsibility.

She believed that sex education would always help me make safe and right decision during my involvement in sexual activities and relationships, hence protecting me from any sexual abuse, exploitation, sexually transmitted diseases, and unplanned pregnancies.

I joined one of the local universities to undertake a degree. At the university the values my mum had taught me guided me through out in my day to day endeavors. I observed high level of discipline and moral responsibility.

During my second year of study, I proceeded to do my internship which was part of the university requirement. I was posted in a cargo handling port in The Information and Communication Department at the IT support desk, with responsibilities that included but not limited to supporting the organization employees on challenges they faced during use of computers and related items.

One early morning, a lady made a call to the IT support desk; she urgently needed help due to a problem on her computer. Because I was still a learner, we left the office with one of the employees in order to provide support to the lady. We solved her problem and went back to the office. At around 3pm the same day, the lady made a call again.

She brought up the same issue. This time around, I was asked to go and solve the problem. The lady was warmer and welcoming than she was in the morning, we talked for a while; she was very interested in knowing me; where I schooled and where I came from.

I also got the opportunity to know more about her. We quickly created a rapport; she said the response at the help desk is sometimes slow. And this she said slowed down delivery of her work. She thus requested my number so that she could directly call me just in case a problem, that requires urgent attention, arose again. I gave her my number and left.

She would call me whenever she had an issue and I was always happy to offer my services. One day she called me just before 4.30 pm and asked if she could drop me in town, I quickly accepted. I knew it was an appreciation for the good service I had been rendering to her. The fare to town was also high and considering I was still a student, I could not reject the offer. I felt lucky for meeting a true friend. She would drop me in town every day and occasionally give me money.

One day she asked me out for coffee over the weekend in a resort restaurant, I accepted as we were now close friends. We had some good time together in a desolate place. In the middle of our conversation she confessed to be in love with me. I was shocked as she appeared much older than me; probably in her fifties.  I knew outright that this was sexual harassment.

I remembered the sexual morals my mother had taught me. The challenges my mother anticipated I would one day face, had finally arrived; I had to make the right decision. I politely told her she was much older than me and that it would not work. We talked for a while as she tried to convince me. I later left having disappointed her. I just never thought that would happen.

A week later, I still ended up in her car again. I did mention amidst small talk that I had never watched 50 Shades of Grey the movie, she insisted I come over to her place over the weekend so that we could watch the movie together. I already had plans to check the movie out with some friends in a local movie theater, but the cost was high so I thought it was a better deal.

I came to her residence over the weekend for the movie date; she warmly welcomed me and took me around the house. She stayed in the leafy suburbs of the town in a four bedrooms storied house with a balcony overlooking the lawns, a garden, and flower beds. A spacious kitchen with fully fitted units, with full size microwave oven, electric cooker and refrigerator, a lounge with knole style, sheesham hardwood sofa set padded with cream cushion, color television with free view. Bathroom fitted with thermostatic electric shower over the bath, wash hand basin, and toilet, and electric heated towel rail. The bedroom had twin beds with matching chest of drawers. She was truly affluent and living large.

But she was all alone in this large bungalow; I asked her why she stayed alone. She said she had separated from her husband few years ago and that she had one child who was in a boarding school.

She served me with an alcoholic cocktail, as we watched the movie. It was the first time I was taking alcohol in my life. At first I felt a little guilty but thought it was okay. It was a gorgeous film with a little humor, lots of luscious scenery, drama and sexy scenes. I got drunk in the process and we ended up having sex.

This continued for a while. We would meet over the weekend and sometime during the weekday just to drink alcohol and we would end up having sex. The issue began taking toll on me.

I felt I had really let myself down for not taking up what my mother had taught me. I thought this lady was taking advantage of me. This issue really depressed me and I become withdrawn even to my family back home. My parents noticed my weird behavior and wanted to know if there was any issue.  I told them I was okay.

I recognized the pattern of deceit and denial I was living in. I endured the shock of revelation to my own conscience about my mistake and decided to stop it completely. I realized that the lady was sexually exploiting me. And that’s when I noted that sexual exploitation can happen to either of the sexes. So I changed for a better me.

As we struggle to empower the girl child, girls must also be educated about the values of love and respect for the opposite sex. This understanding of equality of women and men will prepare both to work together as equal partners in all field, thus ensuring greater appreciation of each other. Therefore, ensuring success in the struggle and push for girl child’s rights.