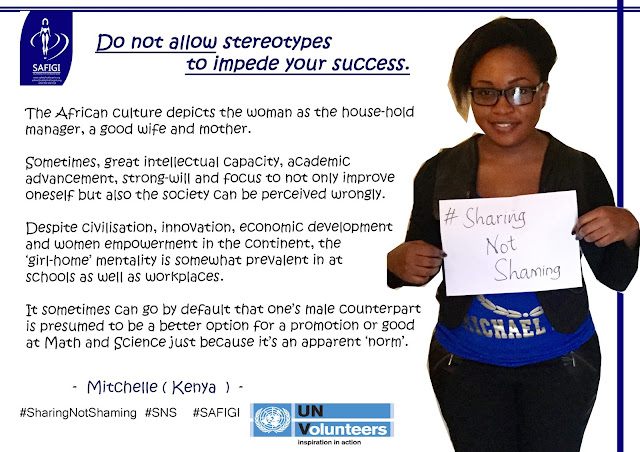 BE YOUR OWN AMBASSADOR
My very first lesson that a girl had no place to prosper was in high school. Despite the normal public system where majority of the schools were ‘single gender’, I found myself in a mixed school. At first, I took no notice of any differences-we were all brothers and sisters, just like in primary school. But with time, things got clearer. The boys population was near three times the girls population, so the boys almost had their way unanimously.
As a teenager experiencing changes and not being sure of how people would perceive your utterances or actions, it can be difficult to stand up for yourself. Most of the girls would end up consoling each other in the dormitory; crying themselves to sleep because ‘the guys said something about them’. I have always been a calm, almost reserved kind of child- passing my tests, assisting others. I however, was not in the habit of lying to myself and others, so I was always in trouble for speaking my mind.
One incident that I would never forget was when I stood up to one of the greatest ‘taunters’ in my class. As young ladies starting to ‘develop’, it was sometimes uncomfortable to embrace the changes. Majority of us were shy, wearing baggy sweaters or skirts, while our male counterparts took pleasure in chanting all forms of ‘praise’ for these changes, an emotionally derailing routine for the young ladies. It was in the midst of this miscreant hullabaloo that I found myself the source of a chant one evening in class as I was walking out during a quiet evening session. I wanted to ignore this, as I would call it, childishness, but my nature couldn’t allow it. I took a turn, and gave the gang leader a piece of my mind on how much he ought to grow up. Need I say that apart from the uproar and unedifying spectacle that unfolded, he and I are good friends to date.
Ever since the incident, I became less or practically not ashamed of who I was, accepting myself as I was, and standing up for myself when need be. I have since experienced many more incidents where it is believed that the girl-child should not advance ‘too much’ academically, neither should she be witty. At some point I was sabotaged at the workplace and my workstation cleared, leaving my items lost because someone thought I would impede their success. Some elders would tell me that I would not attract a husband if I continued with the path I was treading, some would classify me as a feminist and others would call me a mere prude. Not to say that the road has been smooth, but believing in oneself has been a significant factor that has enabled me gain mileage academically and professionally as a young woman in sub-saharan Africa.
The African culture depicts the woman as the house-hold manager, a good wife and mother. Sometimes, great intellectual capacity, academic advancement, strong-will and focus to not only improve oneself but also the society can be perceived wrongly. Despite civilisation, innovation, economic development and women empowerment in the continent, the ‘girl-home’ mentality is somewhat prevalent in at schools as well as workplaces. It sometimes can go by default that one’s male counterpart is presumed to be a better option for a promotion or good at Math and Science just because it’s an apparent ‘norm’. However, one should not allow such stereotypes to bring them down and impede their success.
I have learnt to appreciate that sometimes people find themselves stereotypical or judgemental probably because of how they have been brought up, or the people they associate with often. Teach a baby that a vice is good and the child will grow up knowing that the wrong thing is actually right. As is my case, I have been privileged to work with great people who believe in one’s skills, knowledge and potential rather than gender or appearance for a given job. I have met male professors who acknowledge a young lady’s wit and hard work in a chosen science as well as a male counterpart’s without any bias or prejudice.


Standing up for oneself, in my opinion, should be a basic habit inculcated in us. You can be treated with a negative bias maybe due to your race, gender, intellectual capacity among others, but it is up to you to prove them wrong. Let your work or art speak for itself. As the saying goes, actions speak louder than words. Similarly, seeing is believing. Once others witness your worth and importance, they will almost naturally change a certain preformed opinion of you to what they now actually know of you.