Being Afghan in America 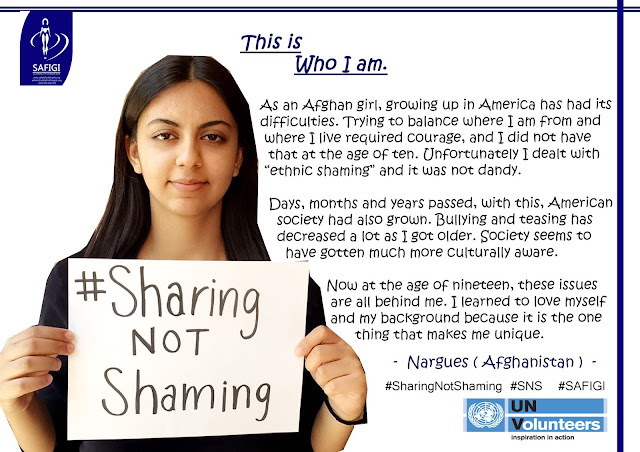 As an Afghan girl, growing up in America has had its difficulties. Trying to balance where I am from and where I live required courage, and I did not have that at the age of ten. Unfortunately I dealt with what is called “ethnic shaming” and to tell you the truth it was not dandy.

The problems began when I started school, even at the early age of six. I remember it was Eid one summer, a celebration generally conducted by Muslims after the holy month of Ramadan. Eid is a celebration everyone was looking forward to, especially the kids. We would always get new clothes, gifts and eat yummy treats we never ate the rest of the year. Nevertheless, during this celebration everyone would henna their hands. Henna is a type of dye that we used as temporary body art. I remember being so excited to apply henna on my hands, not knowing the fatal events that would occur the next day at school.

The next day arrived and as you would imagine, all the kids at school looked at me in an odd manner. They would point at my hands and laugh, as if there was some sort of specimen crawling on it. What is that? Why does it smell so funky? They would add.  Remarks like this made me very insecure.

Several other events occurred as well. I remember it was cultural day at school, a day to celebrate our roots. I was not too excited about this day in particular but my mom decided it is the perfect time to wear my traditional Afghan clothes. I could not say no to her so I slipped into the clothes and wished for the day to end as soon as possible. I arrived at school seeing everyone dressed up. Kids came up to me and touched my coin necklace and stared at the mirrored embellishments on my dress. They gazed at my scarf that was subtly put on my head. I already knew they were uncomfortable, uncomfortable because they could not recognize my heritage. Was I some tribal girl? Was I dressed as a gypsy? The question mark on their face made me want to leave immediately.

Awkward events like this continued throughout my life. Sometimes I was bullied, sometimes I was ignored and sometimes I was even accused of being the extreme.Unfortunately I had grown up after the events of 9/11 where people just assumed that if you have brown skin, an unpronounceable name and roots from the Middle East, then you must be a terrorist.  Growing up in an environment where I was wrongly accused and shamed for who I am was extremely tough. I would often wonder to myself, why can’t people accept me for who I am? Why do they have to treat me so differently? Why do I have to be ashamed of my background?

Days, months and years passed, with this, American society had also grown. Bullying and teasing from my fellow classmates had decreased a lot as I got older. Society seemed to have gotten much more culturally aware and international, finally I felt as though I could fit in.

Now at the age of nineteen, these issues are all behind me. I learned to love myself and my background because it is the one thing that makes me unique. I learned to look at the brighter side and use my ethnicity as a tool that would help me rise rather than a burden that would weighing me down.

After all, nobody should be ashamed of where they come from because it is a part of their identity, part of their soul. In addition, to anyone else who is juggling between two identities or cultures, know that it is possible to create a beautiful balance. If you have ever been targeted because of your background or ethnicity, please share your story.
This is about #SharingnotShaming.