Shamed for Being Thin 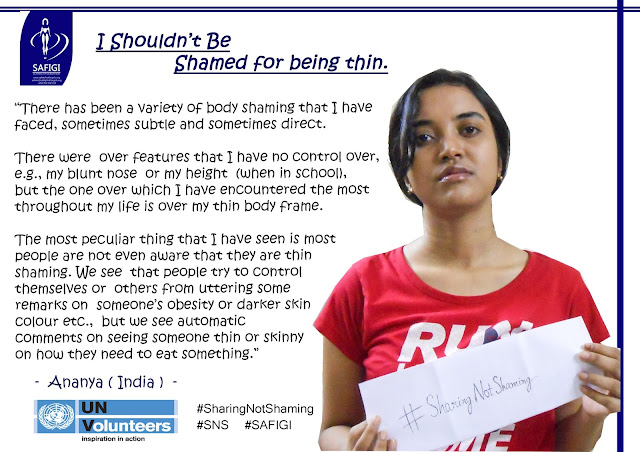 BEING THIN DOESN’T MEAN THAT I’M TO BE SHAMED

There has been a variety of body shaming that I have faced, sometimes subtle and sometimes direct. There were some even over those features on which I actually have no control, for ex., my blunt nose or my height (when in school), but the one over which I have encountered the most throughout my life is over my thin body frame.

The most peculiar thing that I have seen is that most of the people here are not even aware that they are thin shaming. We see that people try to control themselves or others from uttering some remarks on someone’s obesity or darker skin colour etc., but we see automatic comments on seeing someone thin or skinny on how they need to eat something.

I know that due to the image portrayed by the media, people who are overweight face much stigma. But it’s actually a matter of perception. Even if the visual media is seen to promote to become thinner, it seems that in Indian common households girls with few layers of fat are more preferred or else why should I be given such kind advice from more than one person on how should I try to obtain a proper figure so that later I would be considered a good prospect in the marriage market.

Again, I would like to make it clear I am not pulling any view on being under or over weight upwards or downwards, I am just telling about the way the people are affected by what they usually see in their society and how they judge others on the basis of what they think is ‘normal’.

I am just putting forward the thought that if someone is happy with how they look, then, we should let them be so.

There was this incident which occurred when I was in school, maybe in class 9 or 10. Some of my friends from school and others, we all used to attend a biology coaching class together. I don’t remember the details clearly, but I remember that one day the teacher put forward some questions on whether I was not eating properly or if I was having any problems in nutrient absorption and metabolism.

Maybe it was meant to be some remark in light manner, but it doesn’t diminish the effects that it had on me and the other friends who attended the class.

I still remember the way the questions plagued my mind. I still remember how it became a long standing joke amongst that teacher and my school friends. And I still remember how I thought that since he is a biology teacher, what he said must be correct and that if I was thinking in that way, my friends must be thinking in that same way. I remember that when added to the usual remarks of my classmates on how thin I was, it made me question myself time to time if I really had a problem or if I was really so thin that it should invite comments.

These kinds of comments on any body type and shape are much damaging as they put a dent into one’s self-esteem and confidence.

But again, I remember the other aspects too. I realised that I was always eating more or less a balanced diet. I also remember how I searched a lot in books, internet and also discussed with our family doctor over these questions.

And I remember how sometime later I had told that bio teacher about how genetic factors might be a reason along with other factors (three of my aunts, i.e., sisters of my father have similar body frame) and being thin doesn’t mean I don’t eat well or I have a metabolism problem. One cannot just assume that being thin means being unhealthy.

I don’t know if I could make him or others understand it no matter how much I have repeated it till even now. Even if it’s ironic that the ones at college (irrespective of boys and girls) commenting on how I would float away in the air or something else were the ones trying hard to lose weight and asking frequently about what diet I maintain.

But that search backed by scientific facts was one of the firsts which put my mind into rest. I could tell myself clearly that being thin doesn’t mean I am weak or I have any kind of problem and there can be other reasons. And it is not my shortfall if I look differently than what is fixed to be the societal standard for ‘normal’.

Yes, I still have self-doubts on whether I look too thin or not while trying over new clothes or so.

There have been years of occasional remarks and various name callings ranging from stick to size zero which would have surely left some mark or so, more than I would like to admit. But I now know that if I think with a clear mind, I can try to put them past me. I know that if I am well and active, then, no matter how much people try to demean me, I should not let them pull myself down (my BMI stays around 20-20.5, well within the ideal range).

As we grow older, the way we perceive things changes and the way we handle things changes. Books and interaction with other people helped me a lot. It helped me to understand the differences between the spiteful comments, the teasing ones, the concerned ones and the remarks without any intent but due to habit etc. We have to realise when we need to protest and when we have to ignore it, i.e., when that person is not worth it. We are what we are irrespective of it being our choice or us being naturally so.

And any kind of shaming hampers the process of embracing ourselves the way we are. Our nature, our personal character defines us, not a part of our body or a certain body type. Thus, we don’t have to listen to anyone if they are trying to portray us as anything less than a person as a whole.