Recap on Equality Culture from India, Kenya and Sudan by clicking here. 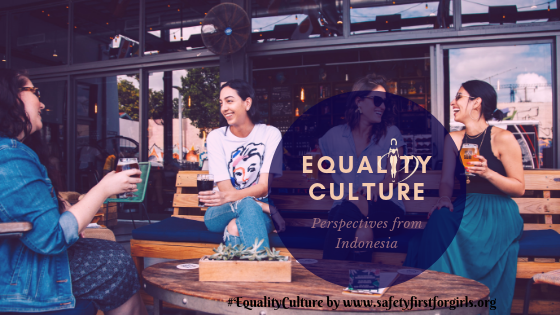 LISTEN IN ON: POSITIVE CULTURAL ASPECTS

LISTEN IN ON: NEGATIVE CULTURAL ASPECTS

Gender equality culture in Indonesia
In Indonesia, there is still a negative culture whereby men have control over women’s actions and decisions. This should be campaigned against, to show that women can do as much as men.

There is also the belief that girls do not need as much education as men, and that they should have their decisions made for them.

Other commonly held beliefs, such as that women are not as capable leaders as men, should be challenged at a cultural level. Women can work with their minds and their hearts simultaneously.

Women need more opportunities to be empowered, and this does not necessarily mean with a career. It means being able to do things for herself and for her family. Women can empower themselves by doing things or making small changes, such as actively using their social media. If women see problems, they need to take steps towards changing them. This also means speaking their minds.

Policies in Indonesia
The gender pay gap does not exist in Indonesia. There is also maternity leave, which some countries do not have. The Ministry of Finance have acknowledged the role of women in the economy, and progress has been made at a political level towards gender equality. But in order for justice to be fair and more equal, there must be female judges and reforms in education. Education is the best way to empower a woman, and make her useful for her community, environment and society.

In summary, there is much room for growth for gender equality in Indonesia. Women can take steps to empower themselves, to make way for the next generation of female leaders.

Equality Culture is a podcast by SAFIGI Outreach Foundation (Safety First for Girls). The discussions on the intersection between Culture and Gender Equality build on SAFIGIs goal for SDG 5 - gender equality and equity, and SDG 11- safer cities. Safety of girls begins with a safe space to talk about what is working in our culture and what needs to be improved.
Culture and various traditions play an integral part of a people who share common everyday experiences. It is a unifying factor which gives each group an identity and sense of belonging detailing the rich history of where people originated from. Many fight and die to preserve their culture and traditions. With globalization, environmental changes and development consistently spreading globally, it has become apparent that some traditional practices promote equal thriving of human beings while others pose a threat to equality and the upholding of human rights.
The #EqualityCulture discussions from across the globe will challenge us to think critically about equality from views of different cultures, thereby creating a first step to a more equal and safer world while embracing our unique values.
This project also aims at bringing volunteers from across the globe to experience a cultural exchange and identify positive traditions as well as speak with one voice supporting the empowerment of females regardless of where you live or what you look like.