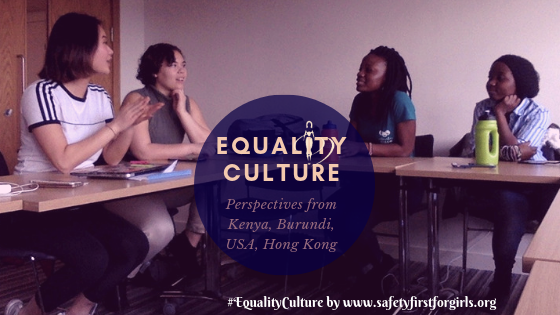 Prudence talks to Shannon from Hong Kong, Jessica from the United States and Maxine from Burundi in Edinburgh about gender equality in their respective countries.

Overview of gender equality in each country:
In the United States there are positive steps towards gender equality, where women are encouraged to thrive in the workplace or at home. In Hong Kong, women have the right to carry out abortions in hospitals but they do not have all the rights that they need and deserve. In Burundi there is still inequality between the sexes ingrained in the culture, although the government are putting policies in place to promote gender equality.

Negative aspects of equality culture in each country:
In Burundi, the drums are only for men. Even when women want to play the drums, this is seen as a masculine instrument that women cannot take part in. Patriarchal norms are also normalised through traditional Christian teachings.

In the United States, sexist behaviour is normalised as ‘boys will be boys’ behaviour. Patriarchal religious beliefs are also used to justify policy decisions which benefit men over women.

In Kenya, women are not allowed to be the main breadwinners as it is seen to subvert gender normals in a damaging or negative way. This means that women cannot be empowered by running businesses.

Women should lead by example in all fields - in the home, in the workplace, in the community. Being good at a certain position works better than speaking out about the issues.

Those with gender equality biases should keep them to themselves, instead of spreading practices to their children. They can hold those opinions, but acting on them exacerbates outdated practices of gender inequality.

In summary, traditional beliefs have maintained myths about gender roles which promote gender equality in cultures around the world. This can be questioned and changed for the next generation with the power of individual action.

Equality Culture is a podcast by SAFIGI Outreach Foundation (Safety First for Girls). The discussions on the intersection between Culture and Gender Equality build on SAFIGIs goal for SDG 5 - gender equality and equity, and SDG 11- safer cities. Safety of girls begins with a safe space to talk about what is working in our culture and what needs to be improved.
Culture and various traditions play an integral part of a people who share common everyday experiences. It is a unifying factor which gives each group an identity and sense of belonging detailing the rich history of where people originated from. Many fight and die to preserve their culture and traditions. With globalization, environmental changes and development consistently spreading globally, it has become apparent that some traditional practices promote equal thriving of human beings while others pose a threat to equality and the upholding of human rights.
The #EqualityCulture discussions from across the globe will challenge us to think critically about equality from views of different cultures, thereby creating a first step to a more equal and safer world while embracing our unique values.
This project also aims at bringing volunteers from across the globe to experience a cultural exchange and identify positive traditions as well as speak with one voice supporting the empowerment of females regardless of where you live or what you look like.